The first thing that most of us do when we wake is check our social media for our news bite and updates for the day. We can admittedly say that to some extent, we are addicted to social media for all sorts of reasons but at the same time have social media etiquette. However, for Uganda’s begotten spoilt brat of a son, who has been pampered all his life, thrives on validation from others on social media especially twitter. A trait that was instilled in him by his father. In constant need of attention, this brat of a son is easily triggered when he doesn’t get the reception and acceptance that he badly craves, something money can’t buy. 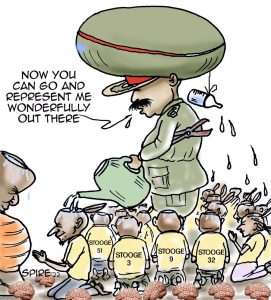 Sad as it sounds, opportunists have capitalised on this bizarre vulnerability of his, recruited many ghost supporters to satisfy his desires. Wannabe millionaires like Balaamu and Andrew Mwenda have worked tirelessly, day and night to keep up with the spoilt brat’s itchy tweeting fingers. A friend of mine named Rachel calls these desperate tactics “kweyiya”. It is not that these wannabes have a choice, the alternative truly poses serious consequences. Which is why it is best to keep the trigger happy lose canon in check, than have him point his gun at your head. Remember, he can’t be let down, NO. Not if he’s paying you.

One can only feel sorry for this brat in away that, he didn’t choose to be like this, he was born into this mess. He is indeed his father’s most successful guinea -pig. His monstrous father is a calculative, cunning and emotionally manipulative strategist. He has trained him well, with extremist ideologies, crudely impounded into his little brain. He’s a victim too, yes a VICTIM! perhaps it’s the reason he often drowns in liquor struggling to comprehend, what he’s been groomed to be versus what he’s capable of doing. The demons in his radicalised brain, wrestling against each other!

A CASE OF IMPERSONATION

KAMPALA – The National Council for Higher Education-NHCE has accorded Muteesa I Royal University a charter status after 15 years...

MOGADISU – Somalia’s president Hassan Sheikh Mohamud hosted a summit with his Kenyan, Ethiopian and Djibouti counterparts to discuss a...

KAMPALA – It appears alcohol consumption has a bearing on the way some Ugandan parliamentarians behave – the reason stakeholders...

KAMPALA – The Committee on Education and Sports has proposed that the National Council of Sports – NCS be granted...