The self-appointed and illegal installation of Yoweri Museveni as the president of the Republic of Uganda in 2016 intensified the fatigue of the masses. It is no secret in Uganda that the despot has used all resources and bent the institutions centralising power to serve his will and that of his clique. Having rigged general elections since 2006, a decade later in 2016, the Ugandan masses had lost hope in the electoral process to remove the despot. The two key aspects that have managed to keep despot Museveni in power since 2006 are none other than the rule of the gun and immense corruption. Without an electoral process, legitimacy for the presidency is lost for any candidate. In 2016, as the dictator swore himself into office, military jets paraded the skies at Kololo, broadcasted on national television warning the masses about any lingering ideas of challenging the despot’s swearing ceremony. Forcefully, the despot confined Ugandans to his rule.

For the past 20 years since 2000, Dr Kizza Besigye had led the oppositional arm but none of his many promises to the Ugandan people stood to be seen fulfilled.  Dr Besigye’s long political run had left Ugandans deflated and sceptical of politicians and elections which left the government grasping at straws. As the political players grappled for control of the civilians,  a fresh face was needed to push the oppositional politics movement forward and Bobi Wine just fit the bill. As the dust settled, now popularised, alias Bobi Wine, Mr Robert Kyagulani Ssentamu rose to the occasion entering the political arena in the bi-elections of June 2017 as Member of Parliament of Kyadondo East. In these bi-elections, NRM disenfranchised their candidate, FDC showed no public support for their candidate either while  DP,  the least popular political party in Uganda had their candidate withdraw from the race making Bobi Wine’s win look like a walk in the park. During his run as the MP of Kyadondo East came the rise of the Togikwatako (Don’t Touch It)  protests. The birth of a  revolution was on the rise as Ugandans protested at home and abroad in unison with their leaders opposing the removal of age limits on the presidential candidacy which would kick the dictator off the ballot paper. As Bobi Wine’s music became more political, songs like “freedom” strengthened the people’s resolve which shook the tables and threatened Museveni’s grip on power.

The Crisis of Political Underdevelopment and Illiteracy in Uganda

Who Shot Down Falcon 50 Jet-Killing President Habyarimana of Rwanda?

A siege on parliament refereed by speaker Rebecca Kadaga guaranteed that the age limit was removed cementing two aspects; the rise of Mr Kyagulani as an oppositional presidential candidate in the general elections of 2021 and the longevity of the warlord in office. Mr Kyagulani’s won the bi-elections in 2017, which was announced and interpreted as a political oppositional victory. Was this another grooming of an oppositional leader to run against Museveni, a position Dr Kizza Besigye had safeguarded for the last 20 years?

In 2015, musician Jose Chameleon released Tubonganawe a tribute to despot Museveni, a song that showcased support from the Ugandan population. Meanwhile, in 2016 for the oppositional candidate Dr Kizza Besigye, musician Bobi Wine released “Situka Tutambule” a sign of solidarity with the opposition leader Dr Kizza Besigye. Inspiration as these anthems were and are; the image painted is a fallacy;  the fallacy that mass support for the Opposition into M7’s parliament his rule can only be overturned that way. Museveni has been losing elections way long before 2006, his first loss was while he campaigned for a parliamentary seat which he lost bitterly, thus, it’s quite logically disorienting that he would spearhead the war against Obote’s regime of 1980. 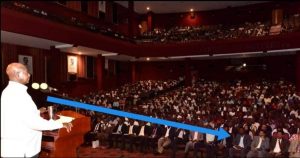 In 2016 Mr Kyagulanyi attended a gathering at the Great Lakes Region University in Kanungu, Uganda. This private institution, founded in 2015 by despot Museveni, educates and benefits only those in the upper class and a few elites in Uganda. During the conference at this one particular function, Mr Kyagulanyi is seated in the front row clapping ecstatically as Museveni spoke to the youth about leadership but mainly about the problem of “pseudo ideology”. The chairperson of the young leader’s association matching with dictator Museveni in pictures is Nation Unity Platform, Secretary-General David Lewis Rubongoya. Elly Tumwinee, another honouree guest, declared once to Ugandans that, “police has a right to shoot and kill” after the November 18 & 19, 2020 massacre. The political schema was set and this new wave of revolutionary politics would send the youth to the ballot box and into their early graves. The hope awaked in the masses would presume that loved and prosperous Mr Kyagulanyi would give the youth and Ugandans, in general, the change they desperately yearned for.

After a bloody campaign amidst state violence and the ongoing silent genocide in Uganda,   despot Museveni swore himself into power on May 12, 2021. The political climate in parliament is shaping into an oppositional vehicle for change as NUP transitions from protests to boardroom politics. Museveni has always been a warmonger and his idea of politics involves corruption, looting, killings, intimidation and the complete disenfranchisement of the Ugandan indigenous people.

This should come as no surprise since Museveni declared on the campaign trail to have infiltrated NUP, the opposition party and how non-existent it is as a political party. Stranded in the middle of these dirty politics are the Ugandan people that continue to be killed, looted and raped by this regime.  Museveni’s political scams have been exposed and now is the time for  Ugandans to move with one voice.

Even though the political actors scammed the people into a revolution, the spirit of the revolution is still alive and strong. Only the will of the people will be the deciding factor.

NATURE OF A MAN

JINJA – The National Drug Authority-NDA has impounded 406 boxes of substandard assorted of medicines worth Ugx100m. The head of...