The Crisis of Political Underdevelopment and Illiteracy in Uganda

Who Shot Down Falcon 50 Jet-Killing President Habyarimana of Rwanda?

Greetings to you all!

I would like to take this opportunity to sympathise with all those countries that have been devastated by the vengeance of mother nature through floods in Europe and Asia, wildfires in the Americas, storms, heat waves, hurricanes, disturbing winter and droughts. The coronavirus pandemic has affected the whole world adding more pain to the world still struggling to find solutions to the furry of mother nature.
I may not be the person in a better place to advise but the world should urgently be well prepared for more weather disturbing scenarios. The affected countries should think of moving away from the ancient kind of construction and think about building houses on hill circling belts which will make it very hard for floods or landslides to destroy houses and human life in their path.
As the world battles all the problems there may be, the country I come from Uganda is encountering a dictatorship that has brutalised it for more than four decades. A country led by General Museveni a man who has fooled, defrauded and manipulated the whole world into believing him to be a saviour yet it’s a devil that has feasted on Ugandans all this while. Once Museveni was welcomed to Uganda as a refugee with many other Rwandese in the 1950s, saved by the leaders back then providing a place of refugee in Uganda. Museveni and his group manipulated everyone and ended up taking power in 1986. This was after massacring Ugandans in an orchestrated genocide. Shockingly, the current Rwandese president was a party in this genocide. I always feel terrible and sick when I see other world leaders shaking hands and dining with these beasts. They have done so much in destabilising the whole of East and Central Africa. 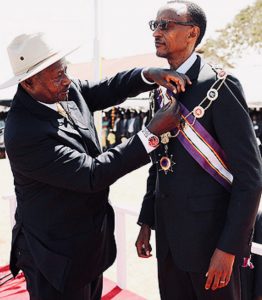 Ugandans have borne the brunt of these two vampires holding power in Uganda and Rwanda respectively. The world has focused on massacres in Cambodia, Chile, Argentina and the Bosnian genocide, and has vehemently refused to acknowledge the massacres committed against the people of Uganda by these two beasts.
In this regard, the Ugandan people can no longer bear being continuously killed in their own country by the Rwandese who came into Uganda as refugees. Let the United Nations and the responsible agencies find another place to settle them or repatriate them back to Rwanda. Currently, Uganda is sitting on a timed bomb and it can go off any time. Let the world not condemn any Ugandan for what happens next.
Ugandans cannot reconcile with perpetual murderers and live alongside killers who see others as animals to kill. We can’t risk leaving our children around people who can turn against them anytime.
A clear message to the international community from a Ugandan.
Tags: KagameMuseveniRwandaUganda
Previous Post