KAMPALA – State House has dissociated itself from a letter, circulating on various social media platforms, ordering the immediate arrest of noticeable entrepreneurs over alleged financing of a rebel cluster.

The letter, which President Yoweri Museveni is purported to have issued on November 28, 2022, directed the Chieftaincy of Military Intelligence – CMI to apprehend at least two Rtd army officers, in addition to eight businessmen – operating from different parts of the country for their alleged financing of rebel outfit –Uganda Coalition Forces of Change.

But Farouq Kirunda – the deputy Press Secretary to President Museveni appealed to the public to disregard the letter, describing it as fake. 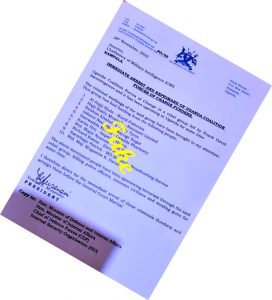 “The general public is highly urged to disregard a communication circulating on social media allegedly authored by H.E the President of the Republic of Uganda instructing the Chieftaincy of Military Intelligence – CMI to arrest prominent businessmen for sponsoring terrorism activities under a rebel group named the Uganda Coalition Forces of Change. The letter is dated November 28, 2022 and referenced PO/25,” noted Kirunda, in a December 11, 2022 statement, adding that the letter carries misleading information and it does not originate from the State House.

The authors of the alleged fake letter seem to have targeted the prevailing situation where attacks on the police stations by unknown people have become rampant.