To abhor is to regard something with disgust and hatred. That is exactly what I do when I sense that discrimination has been introduced in Uganda’s education system. Since Tibuhaburwa Museveni introduced Universal Primary Education (UPE), and later Universal Secondary Education (USE), this has, unfortunately, become the case.

At first glance, Museveni’s efforts appeared to be altruistic, directed to the absolute majority of our poor and needy who could not afford to fund their children. Of course, the number of children in school rose supersonically giving Museveni the repulsive attitude to boast about the numbers of students that his government has been able to fund through Primary and Secondary school.  Upon further examination, Museveni’s government has completely ignored the faults to be found in not only the quality of education but also the alarming rates at which students are dropping out of government-funded schools.

Besides, the quality, intellectual capital, knowledge production, debating and prioritization of issues are declining. Critical thinking and analysis seem to be a thing of the past. Scholars who engage in some critical thinking and analysis tend to avoid topics that are either considered politically sensitive or those that would create knowledge challenging the mushrooming knowledge of ignoramuses in governance. Such avoidance due to fear coupled with a colonized education system lays the foundation for the UPE/USE systemically miseducated generation.

The discrimination that is apparent in the country’s education system makes our situation abominable. The masses that are supposed to lead and decide for us fail to do so with the necessary knowledge. They proceed by trial and error to the detriment of our present and future generations. Take, for example, the decision to pay science teachers higher salaries at the expense of Arts teachers and numerous government workers, including very senior ones, thereby stifling supervision and the pecking order.

In the biological sciences where I belong the phrase pecking order refers to the order in which the animals eat, dominant first and so on down to the weakest. The decision to pay so-called Science teachers bigger salaries than Arts teachers has not only deliberately introduced a crude divide and rule structure of governance in government schools, but has also institutionalized chaos in the school system. Furthermore, alongside such chaos, the hierarchy of other government systems has also faced similar disorder. With the declining productivity within the governmental institutions that are now consuming more than they produce, motivation continues to erode everywhere. Labour unrest threatens to establish permanent stay in the country. Even administrative and support workers across the board might express their disgust by sit-downs or by demonstrating with placards throughout the country. Such practice has divided Ugandans violating their right to earn a living wage and develop.

Continuously poking at the growing problem, Museveni’s government recently decides to provide special treatment to workers with knowledge in natural science as a special category of workers, further dividing the academia in Universities alike. He has influenced the University Councils of the State Universities to change their Salary Structures to ensure that lecturers and Professors in the Natural Science-based disciplines and professions get higher salaries than their counterparts in the Arts (Humanities and Social Sciences). This government has – institutionalised hatred for the Arts and Social Sciences. Museveni’s government wished to provide docile, silent academia, that offers no critical thinking, efforts to demise the masses’ ability to analyse their conditions. Alternatively, the government is preoccupied with technology and militarisation to further marginalise its citizenry and dominate it. Currently, at Makerere University several disciplines in the Arts and Social Sciences have been abolished. The academia has become docile and silent as if they are committed to a conspiracy of silence when many issues in the country urge Intellectual guidance and analytical critical thought. Knowledgeable workers have been reduced to robots driven away from research topics that could change the culture amongst the masses. 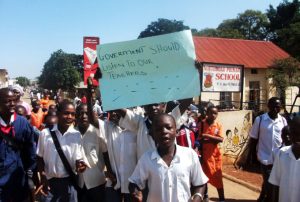 Ignorance in regards to what science is contributes to this calamity. The governing forces are arrogantly obtuse to the fact that science is one of the three dimensions; natural, social and humanities (Arts). The dimensions are not mutually exclusive; they are mutually inclusive. Science itself is multidimensional interacting dynamically and benefitting all the other dimensions involved. For example, social science and political science are to be deemed as not only natural science but also humanity. Such contradictions apparent in Museveni’s government decision-making further raise and provide grounds to reject the discriminatory categorisation amongst knowledge workers, across the Humanities, Social Sciences, and Natural Sciences.

Museveni’s government’s education continues the colonial project’s endeavours rigorously erasing all attributes of our indigenous philosophical approach to education. Elders in communities narrate education practices that combine -social, humanistic, natural, ecological, environmental, lingual, cultural, medicine, engineering, creativity, innovation, et cetera. Education systems that were built to resolve the problems and challenges of a society, wholistically, have been disintegrated to destroy the knowledge fabric enabling such peoples to have a culture of their own.

If we want integration of and interaction in anything, we must promote integrated and integrative education. When we do, we shall begin to produce graduates at all levels of education that will be agents of advancing the masses. Such graduates will not be docile onlookers when their country is being disintegrated into meaningless small districts. They will be advocates for a more holistic, integrated country, and an integrated and integrative education system. They will be able to work versatile to the challenges of the future prepared with a foundation to secure admired projections. If we talk of an integrated East African Community they will be the ones to explain it to East Africans more meaningfully and effectively. Discrimination is the antithesis of all this. I cannot endorse discrimination in education. Can you?

For God and My Country.

JUBA – South Sudanese President, Salva Kiir has expressed gratitude towards his Ugandan counterpart, Yoweri Museveni describing him as ‘an...